This is part of the journey that I will be writing continuously to document my first-time owner experience with my new puppy - Tamago. Tamago is a black/tan yorkshire terrier. He’s a very playful, active (medium level) and smart dog.

Please do note that whatever I’ve documented here might not be the best practice. Each dog has their own unique personality… Whatever that I’m doing for Tamago might not be suitable for your dog.

Owning a dog is a lifetime commitment. We need to be responsible for its life and ensure that they are well taken care of when they come to our home. I’m a first-time owner so I’ve done a very extensive research before I get a puppy. Lucky for me, I’ve friends who have provided several useful resources that cover most of the topics listed below.

Finally, I decided to go with Yorkshire Terrier because of the following reasons:

It took me a few months before I decided that it’s time for me to scout for a puppy. I feel that it’s important to feel confident that you are able to take care of a puppy.. It’s a life and you should not be risking a life just because you “feel like having a dog”.

The key idea is to scout for a pet store that is well-maintain, clean and “responsible”. I used Instagram to find shops and read reviews on Facebook pages.

I found Shake-a-paw on IG while I was browsing around and it happened that she has Yorkshire Terrier coming in November. Went to check out the reviews and most reviewers mentioned that she has a very clean and well-maintained store. The store owner has 3 dogs so it reflects how much she loves dogs. When I visited the pet store, it’s very appraent that she has put in a lot of effort to maintain the place. Overall, it’s a very comfortable place and you can see that the puppies are active.

Meeting Tamago for the First Time

My friends told me that it’s all about the connections you have with the puppy at the first sight. I totally agree with what they said after I’ve met Tamago for the first time. It’s hard to describe… perhaps something like love at first sight? It’s like a compatibility index I guess?

Tamago was resting (almost sleeping) in his crate… probably feeling very sleepy after he had his dinner. There were 3 yorkies and 1 of them has already been reserved by another person. He just caught my eyes the moment I stepped into the store. He’s not the most active one among the three puppies but somehow we connected when we had eye contact.

It didn’t get me long to tell the store owner that I would like to bring him home. It’s just… as simple as that.

After I’ve decided to take Tamago, I placed 50% deposit on the spot to make a reservation. The store owner kept Tamago for another week to ensure that he is well before I can bring him home. There are some clauses that help to protect both the potential owner and the store. If the puppy is not suitable for sales, the deposit will be refunded.

Before bringing Tamago home, it is essential to puppy-proof my room so that Tamago has a safe space to play, eat and sleep. He’s a small breed dog so he doesn’t need to have a very big space. The rule of thumb is to ensure that he has space to turn around in the crate and sufficient play area for him to run around.

I used to think that it’s quite cruel to confine a dog in the crate. Let’s face it. We will not be able to supervise our dogs 24/7. Crate training is essential as it provides a safe space for the dog.

Most puppies whine and cry when they are confined in a crate when they are first confined in the small space (or being away from the humans). I was lucky because Tamago has been sleeping in the crate alone overnight. He didn’t have this problem at all. 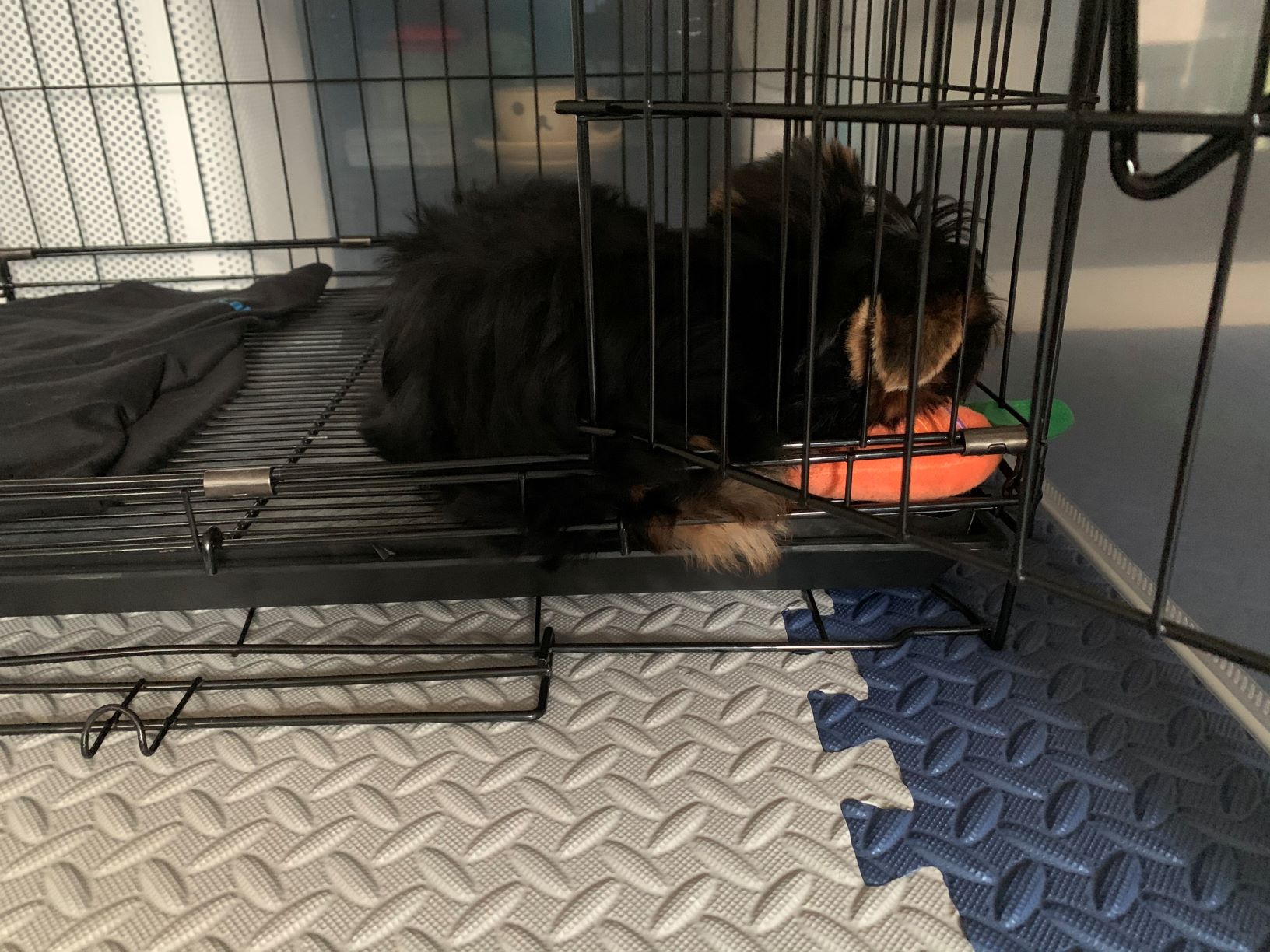 When Tamago was still very new to my room, I need to carry him into the crate during his bedtime and nap sessions. After being together for a month, he will walk into the crate at night to sleep! That’s when you know that he has already registered the crate as the living space.

I wanted to do a playpen so that he can continue to play with his toys in a safe area when I’ve to focus on something else at my desk. It can also be used as a “time-out” session when Tamago starts to bite aggressively when he’s younger.

The key idea is to create a space that’s large enough to place his pee pad/pee tray and yet he has space to walk around and play with his toy. I put his crate in the playpen since it will be good for him to take a nap whenever he feels tired (and he does!).

In total, I’ve paid S$140.11 for these items. It’s possible to get these things at a cheaper rate but I think it’s more convenient for me as a first-time owner to just get whatever that the store has been using for Tamago as I slowly experiment other brands.

Apart from this, I’ve to create an account on AVA for the store owner to transfer the ownership under my name. The transfer of ownership costs S$13.50. If I didn’t remember wrongly, you’ll have to renew this ownership fee annually.

Tamago has already done 2 vaccinations and 3 deworming procedure when I brought him home. The store owner will pass you the vacinnation card so that you can use it for the next vacinnation. I was also told that the puppy should not be brought out of the house before the 3rd vacinnation as he has not gain sufficient immunity yet.

I’ve brought him to his 3rd vaccination. He has also gone for professional grooming as his fur grows really long! I’ve also purchased additional 3 cans of milk replacer. I’ve also purchased a dehydrator to make dehydrated treats for Tamago. I think it’s worth it in the long run.

It was 12.12 around the corner so I managed to get some of these items on sales as well! Lucky me! For instance, the fresh spray for dog costs almost double without the sales.

It adds up to be around S$850 for all the other items and stuffs needed for his daily care and training. Most are one-time cost and should not be incurred in the near future. Other perishable items like food and snacks turn out to be quite cheap if you compute the daily cost.

Tamago eats small portion. He eats 3 meals a day so it turns out to be around less than S$5 per day. I used the dehydrator to make his treats and the chicken breast that I’ve gotten is just S$1.88. Oh, I’ve also kept frozen carrots as an alternate treats. That carrot has lasted can probably last more than 1 month. I believe this can possibly last him for at least 2-3 weeks before I need to make another round again.

Owning a dog is a lifetime commitment. Owner needs to be responsible and always prioritise the well-being of the dog. In the next post, I will share about the schedule that I’ve used to take care of Tamago. This can probably shine some light on the effort and time needed to take care of a puppy.