Lately, my student and I have been trying to take apart a firmware at work. We couldn’t identify the chip because we were told not to spoil the hardware. There is no datasheet and we are pretty much stuck. After taking a step back and digging more into other documentations, I realised that we might be dealing with some proprietary runtime system. Gosh.

In a nutshell, firmware is a special type of software that provides codes and resources to instruct the hardware what to do in a system. It has to be held in the persistent storage (e.g. ROM) as it contains all the critical functions to run the hardware.

Typically, an image may contain the following components:

What’s in the firmware is dependable on the vendors. Generally, there are three types of firmware format:

The firmware image could be compressed and/or encrypted to protect against the reverse engineers.

From what I understand, it seems like it’s still very common to distribute the firmware without any security measures.

One way to start understand more about the firmware is to read the change logs. Not too sure if they have typos as the change logs seem to be outdated on the website… but it shows that the system on the camera is able to mount exFAT and FAT32 file system.

The first thing that I did is to use file to identify the format of the firmware image. There is not much information using file apart knowing that it’s not an archive file.

Next, I used the strings command to see if we can find any interesting readable strings in the image. This helps to see if the firmware image is encrypted. Fortunately, it is not! Furthermore, we are able to identify the actual model of the camera. It appears that SJ4000 might be a white label of the Novatek NT96655 dash camera.

We used hexdump to view the first 16 bytes of the firmware. The first 4 byte, 42 43 4c 31, is the magic number for Basic Compression Library. Fortunately, BCL is open-source and can be found here.

We will need to decompress the firmware image in order to analyse further. To do this, we downloaded the source codes and compiled the library using the make command. This will generate bfc.exe in the src folder, which can be used to compress a test file.

We ran all the algorithms on a test file and dump the first 16 bytes of the compressed files.

The fifth and sixth bytes of the firmware might mean something for the firmware developer. To find out, we will need to do statistical analysis on the past firmware images to see if there are any patterns. We will not do it in this post.

Now, we should be able to decompress the firmware. Unfortunately, we encountered segmentation fault.

I believe a segmentation fault might happen if f pointer is already at the end of the file. Now, let’s find out where ReadWord32 is used. The function is called 3 times in a row when the program is preparing for decompression. After that, the buffer pointer (from 13th byte onwards) will be passed to the respective algorithm to decompress the data.

There are two ways this code might have gone wrong at this point of time.

I went to take a look at the decompression file, lz.c, to find out what are the bytes that are written to the header.

The algorithm computes the length of the output and assign the value to bestlength. Based on the code above, we can confirm that 00 33 5c 90 (12th to 16th byte) is the output size of the compressed image.

The output size written in the header is 4-byte smaller than the size computed by GetFileSize(f) - 12 bytesin the decompression algorithm. The size variable, insize, is used as the loop condition in function LZ_Uncompressed. This cause the code to access out of bound memory.

To fix this problem, all we have to do is to compute the correct insize variable. Instead of taking away only 12 bytes of header, we need to take away 16 bytes.

After modifying the source codes, we are able to decompress the image without any problem.

We confirmed that we have decompressed the file successfully by using the strings command again. Instead of garbage, we are able to extract sets of complete ASCII strings from the firmware image.

We ran binwalk -A and noticed that the firmware uses MIPS. We can most likely throw this file into a disassembler and get some good analysis results.

We can confirm that this firmware is using eCos v2.0.6 based on the given strings.

Anyway, I thought it might be quite interesting to grep http from the firmware. Indeed, we see a hardcoded IP address in the firmware.

Unfortunately http://115.29.201.46:8020/download/filedesc.xml is no longer available. But it’s useful to find more information about the camera online.

For instance, here’s the document that describes all the possible GET commands on NT96660. Apparently, the IP address used to contain XML document to determine if the camera should update the firmware on the camera. It seems like the camera has hosted a HTTP server. 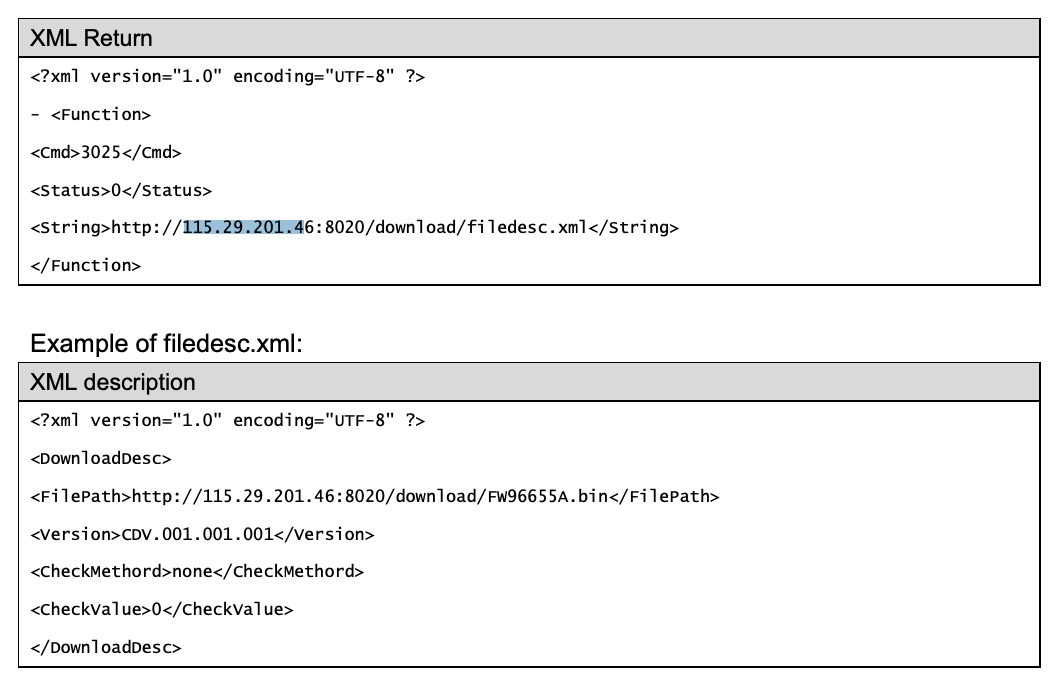 Indeed I was able to access my camera’s home page by visiting its IP address, which can also be found in the strings. The most interesting command that we can do via wifi is to perform OTA firmware update.

Apparently, you will need to upload the firmware onto the camera. The firmware should be placed in a location that is understood by the project. I assume this refers to the project creator.

Seems like as long as you know where the firmware should reside, you can run this command over the wifi to upload the camera with rogue firmware. However, we have to note that the attacker’s motivation in this case will not be strong since SJ4000 will not be switched on all the time. Anyway, it seems like this could be the location that they are looking for:

This probably means that my MicroSD card is mounted on A:/. I can probably upload firmware.bin and execute the HTTP command to update firmware.

Before we get into some hardcore reverse engineering work, we can always run a quick network scan to find out if there are any open ports on the camera. There are 3 open ports. Glad that administrative remote ports are not in the list (e.g. SSH)!

It seems like port 3333 is used to stream camera’s status and events while port 8192 is used to service photo shoot preview.

Since we know that the firmware uses MIPS, we can attempt to analyse the firmware using a disassembler. Ghidra is very useful in this case since the free IDA pro does not support MIPS. 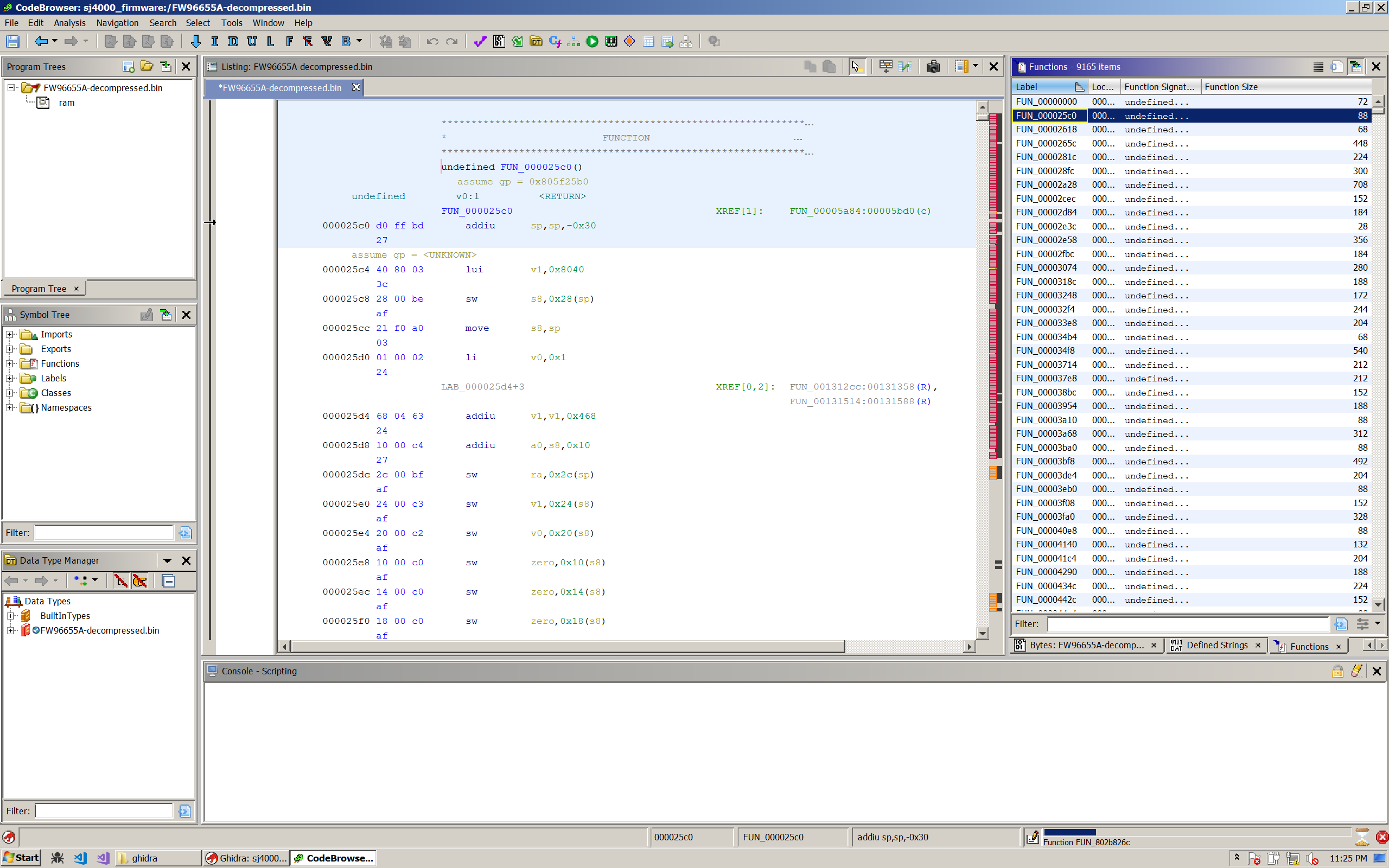 The program identified a substantial number of functions (on the right windows). It took a while to analyze and finally identify all the strings in the firmware. Not too sure if it is because I’m running Ghidra in a virtual machine.

Anyway, the first step to disassemble the firmware is to find out the loading address. The correct memory mapping is important as it maps the branches and references to the right addresses. One technique is to look for static addresses in the instruction code.

It may not be very obvious but the code is trying to reference something at 0x800023c4. In MIPS, sw means store word. This means that it is trying to store something from the left operand to a specific address at the right operand.

I think there are methods to find the loading address but I don’t know MIPS enough to read the instruction. So I decided to try my luck and reload the firmware at 0x8000000 instead. 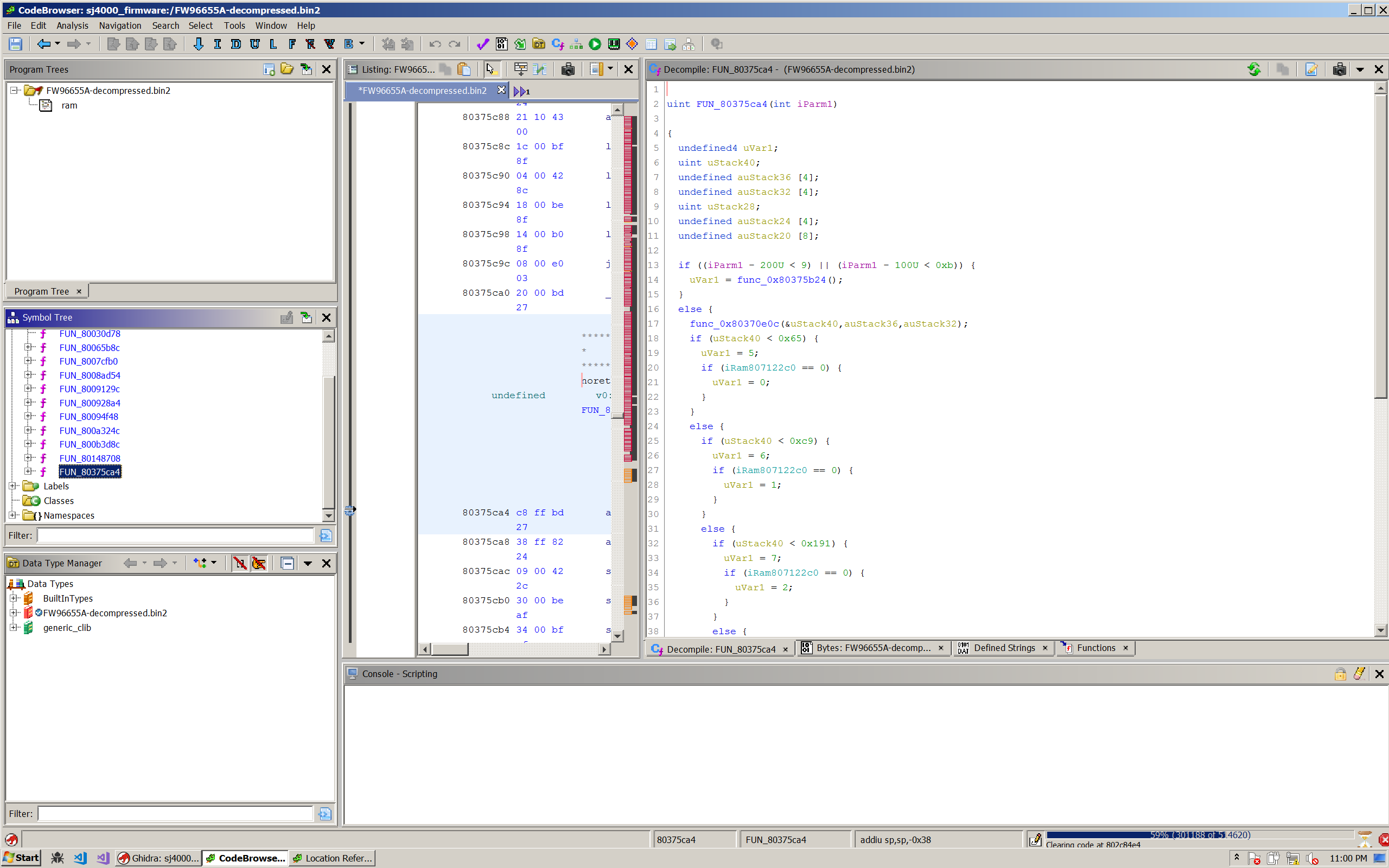 And booom! We got it right! It’s obvious that we got it correct because the instructions are decompiled nicely into readable code as opposed to the previous time we loaded the file.

After this, we can analyze the codes to look for bugs and patch the firmware for better use.